DNA studies have long provided a window into the ancestry and the genetic potential of a species, be it an animal, microbe, human or plant.  But we are only now beginning to realise that it’s not just the organism itself but also the environment it lives in that provides valuable information on its survival.

Current methods to look at environmental DNA are not detailed enough, as Genomics Aotearoa scientist Dr Rachael Ashby has found, having completed her PhD studies into Greenshell™ Mussels. 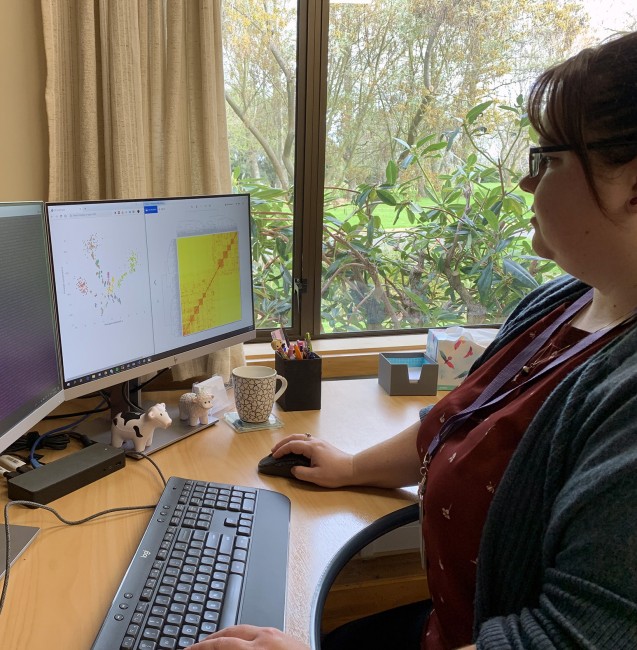 This work involved assembling the genome and transcriptome of the Greenshell™ Mussels and using genotyping-by-sequencing (GBS) to develop a cost effective, high throughput approach to identify genetic variations known as single nucleotide polymorphisms (SNPs) of interest. The aim for the aquaculture industry was to use genomics to enable selective breeding of mussels.

Rachael found that current data analysis methods to differentiate what was mussel and what was bacteria, viruses, parasites, fungi or algae or something else that “hitchhikes” on the organism’s DNA were time consuming and not specific enough. While the study did give some information on different species, the unanswered questions left plenty of scope for further development.

And this has inspired her to dig deeper

Based at AgResearch Invermay, Rachael is combining her studies of computer science and biochemistry at the University of Otago with information from international workshops on new methods, and collaboration with other Genomics Aotearoa postdoctoral fellows, to hopefully develop “gold standard” systems of analysis.

She’s hoping this will produce data on the organism and its environment that are more accurate, reliable and reproducible, helping to understand the genetic characteristics of a population. Once refined, these methods can then be applied to genomic information to benefit primary production and conservation. In farming that could mean knowing more about the complex functions of microbes in a pasture-based farming system, for example.

Her work with AgResearch also involves benchmarking of bioinformatics pipelines, looking at the different workflows available to derive SNPs from genotyping-by-sequencing data, using sheep as the model. The aim is to contribute to knowledge on the genetic characteristics of a population, including biological applications like parentage confirmation.

Rachael is excited about the potential. “It’s about diving deeper into the wealth of DNA data to extract maximum value from the sequencing process. And that’s an interesting problem-solving space to be in right now,” she said.