Where are all the four-leaf clovers? And what does that have to do with learning to code?

By Monica Vallender, Master’s student with AgResearch Invermay and the University of Otago

A few months ago, while home for the Christmas break, my mother – out of the blue – turned to me and asked, “what made you actually decide you wanted to go to university and study science?” Shocked and never thinking that I would someday have to explain my choice, I replied saying “honestly, no one ever told me I couldn’t.”

I never really considered that no one else in our family had done that before. 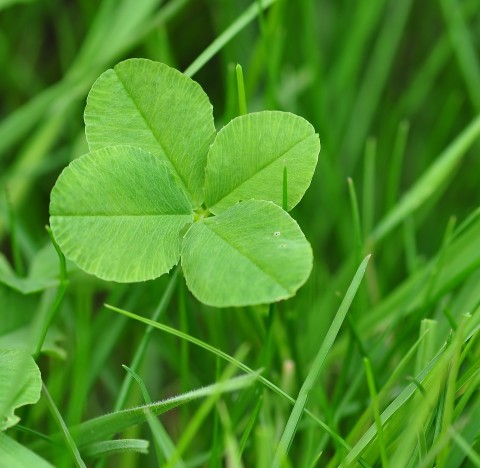 I come from a stereotypical kiwi family – my family was working class, which meant that sometimes over summer, I’d get to spend a few weeks on a farm in the middle of nowhere with an aunt or a second cousin to “keep me out of trouble.”

What I never appreciated until recently, was that the women in my family always worked as hard as the men – I literally had an aunt who could shear sheep faster and better than anyone else!

So, when bright young eight-year-old Monica said she wanted to be a vet, quite literally, no one ever said she couldn’t.  My aunt, however, did promptly leave me and my cousins out the back of the farm with a shampoo bottle of thistle-poison, and told us to get all the thistles on the walk back.

I spent those summers learning about the world around me – looking for the cows with straight backs and learning to stop feeding the lambs when they got bloated tummies.

The vet dream came to an end very quickly when someone told me you needed to put animals down, but I still had this overwhelming curiosity about the world around me.

Even from a really young age it was not lost on me that I was just a very small part of a big world that was alive all around me – and it was all one big puzzle I wanted to put together. “Mum, why do deer antlers go fluffy? Why does that stick have legs? Are the moths in the shed THAT big, or am I just that small?”  And for the love of everything – “Mum! Where are all the four-leaf clovers!?” It probably had a lot to do with my not being lucky or Irish, but I was a girl obsessed.

As I grew older the visits to rural relatives became less cool and therefore less frequent, but I still found big puzzles to contemplate – biology, chemistry, forensics – anything I could get my hands on. So, at 17 when I got an acceptance letter from the University of Otago, I RAN for it (meaning mum drove me down from Mangatainoka, Tararua).

A journey into genetics

After figuring out that in fact DNA not money makes the world go round, I completed my Bachelor of Science degree in Genetics (with a lot of chemistry and forensics) in 2018.

After really enjoying a particularly puzzling bioinformatics assignment in the final year of my degree (involving an excel spreadsheet and lab partners who were not impressed by the need to do computer work), I decided to try my luck with a summer internship in bioinformatics.

As a recent graduate, I drove my run-down Fiat Tempra all the way to Mosgiel for an interview with AgResearch (and only had to jump start it three times), completely forgot to shake everyone’s hands, but got interviewed for three internships after only applying for one (yikes).

I had the huge privilege of working with Dr Rachael Ashby for the summer – yet another woman who simply never told me I couldn’t. I spent the summer learning how to code, being told I wasn’t there to fetch coffee, and doing too many side projects.

Learning to code was a big, exciting puzzle on its own – but combined with the complexity of genetic sequencing data, it was heaven. It’s a puzzle in which there will always be another piece to figure out.

Two years on, I’m almost finished with a Master’s degree in Genetics, studying our wild New Zealand salmon population, and working with minds much more brilliant than my own. This project stretches from little old me at Otago and AgResearch, to Fish and Game in Canterbury, to Cawthron in Nelson and all the way over to California, USA.

My research blends conservation genetics, bioinformatics and quantitative genetics to give insight into how we can better manage the wild New Zealand chinook salmon population, which has unfortunately been in decline like chinook salmon in the USA which are now critically endangered.

I focus on the population genetics of our NZ salmon population, since their introduction around 110 years ago (the first successful introduced self-sustaining population of Chinook Salmon outside their natural range), in the hopes this will give us insight into the current genetic diversity of the New Zealand population and potential genetic mechanisms of reproduction by cryptic female choice.

Being part of the bigger puzzle

Every result I generate, every salmon paper I read – there are these big fancy established scientists on the project who are just as excited as I am about my niche little salmon project.

Being able to do the research that I do is a genuine privilege. I get to come to work every day and learn about the world, solve problems and push the boundaries of knowledge just a little bit further.

And here’s the kicker – it actually does something. I’ve added my Lego block to the Lego-castle of salmon genetics. What puzzle or Lego block I’ll have the privilege work on next is to be continued, but I am re-assured that despite my non-traditional background, I belong in this big, beautiful world of science.