Gillenia is a perennial shrub found here and overseas, and is related to a number of fruiting trees including apples and pears, all part of the Rosaceae family.

Despite belonging to perhaps the third most economically-important plant group globally, little research has been done on the Gillenia compared to its more well-known fruit relatives until now.

Genomics Aotearoa-funded researchers based at Plant & Food Research were the first to sequence the Gillenia genome in 2021, and have since created a new high quality genome assembly using the very latest sequencing technology.

A genome is the complete set of genetic material present in a cell or organism. 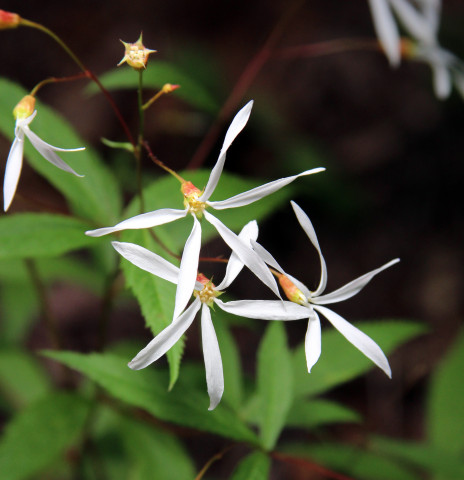 This crucial genomics research has provided fresh new insight into the similarities and differences between fleshy and dry fruit development. Understanding the key drivers of fleshy tasty fruit has enormous potential for further developments for tree crop production in New Zealand.

Having this initial genome meant the researchers, led by Plant & Food Research project co-leader David Chagné, were able to confirm some interesting characteristics, including that Gillenia has an unduplicated genome (it has two identical copies of genes), unlike its apple cousin.

Genome duplication provides an important source of novelty in evolution, providing additional genetic material for mutation and selection, resulting in specialised or new gene functions. Without such gene duplication, the opportunity for species to adapt to changing environments would be severely limited.

This plant therefore offers a unique insight into the ancestry and evolution of Rosaceae tree crops, and provides the means to enhance comparative genomics across the entire Rosaceae plant family.

In particular, there is a lot to learn from Gillenia growth, flowering and fruiting behaviours that are similar across the family and can potentially be translated from one Rosaceae species to another.

Plant & Food Research are establishing Gillenia as a model to further understand the critical biological processes that co-ordinate cellular activity (known as transcriptional regulation) of fruit flesh development in apple.

Dr Cornille studies the effect of transposable elements (that is DNA sequences that have the ability to change their position within a genome) on fruit domestication.

The work continues, with Plant & Food Research now adding to their existing library of Rosaceae genome sequences with additional domesticated and wild accessions of apricot, apple, pear and almonds, which will allow the team to determine if transposable elements have a role to play in key characteristics that have been selected during domestication.

This verification and the genomic resources produced will provide a reference to translate the wide range of information between the well-studied species of apple, pear, peach, strawberry and raspberry.