Applying genomics to the taxonomic dilemma of threatened albatrosses 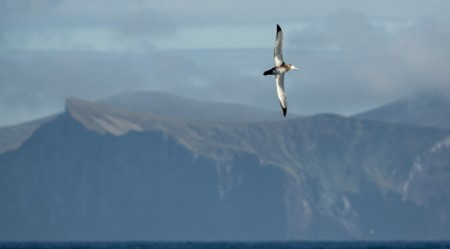 An Antipodean albatross in flight near the Antipodes Islands. Photo: Stephen Bradley

If there’s one thing that you could get albatross taxonomists to agree on, it’s that you’ll never get all albatross taxonomists to agree on species boundaries. However, species are the currency of conservation, so it is critical to keep advancing our collective knowledge of how populations diverge and speciate. Although genetic markers have been applied to albatross taxonomy, no studies have yet taken advantage of the more powerful genomic data that can provide an extra line of evidence, alongside morphology and behaviour, to enable species differentiation.

The Antipodean and Gibson’s wandering albatrosses are endemic to Aotearoa New Zealand and are under serious threat due to their high incidence of bycatch in (predominantly longline) fisheries worldwide. Although reasonably distinct morphologically and behaviourally, these two populations are currently classified as a single species (Diomedea antipodensis), with two described subspecies (D. a. antipodensis and D. a. gibsoni).

These birds breed exclusively within Aotearoa’s waters, but at other times they forage far and wide across the world’s oceans. This means that protection solely within our Exclusive Economic Zone is inadequate, as the birds regularly encounter fishing fleets in international waters. They are reliant upon suitable protection from conservation regimes worldwide.

Each subspecies is also known to forage in different regions of the ocean, which can expose them to different fishing fleets. Both taxa are listed as ‘Nationally Critical’, which is the highest threat level under the national Threat Classification System. However, the Antipodean subspecies is thought to be in greater decline, and at the current rate will be functionally extinct within 20 years. While our country recognises the different threats and population trends of each subspecies and is largely protecting them as separate management units, international conservation regimes currently only protect the birds grouped at the species level. Formalised differentiation of the subspecies will help their conservation.

Collecting samples for a high-quality reference genome of birds that breed in the inhospitable subantarctic region is not the easiest of tasks. However, thanks to the dedication of a small team of scientists who travel to these islands to monitor the populations every breeding season, blood was collected, frozen and delivered to me in Wellington in top condition, more than 1000km and several weeks after collection.

In comparison to sampling, sequencing of the reference genomes was the easy part. I was able to drive these samples 20 minutes down the road to ESR in Porirua for DNA extraction and library prep before sequencing on their Oxford Nanopore GridION. Data quality and output are being refined to produce the highest quality reference assembly possible. Being able to use new and constantly advancing sequencing technology is exciting, especially when the technology is local, and I can be involved at each step of the process. The next step in the journey will be to piece together the DNA puzzle to create the reference assembly for each subspecies.

Creating these high-quality genomes will allow us to revisit the question of how these populations are structured and just how genetically differentiated they are, using a much more powerful dataset than ever before. Have we been correct to treat them as one species? Or do we have two distinct species to protect? Access to these reference genomes will also open a raft of possibilities for future genomic studies of albatrosses.

A trip of a lifetime to Aotearoa’s subantarctic islands 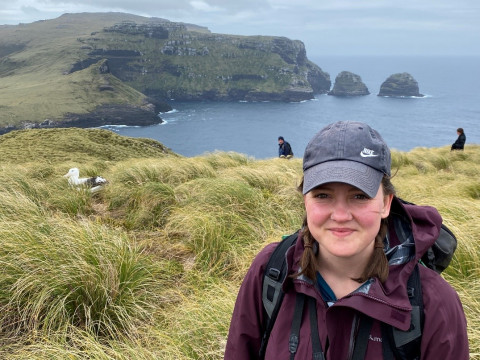 The author with a Gibson’s albatross on the Auckland Islands in January 2022, during a trip to Aotearoa’s subantarctic region with Heritage Expeditions. Photo: Imogen Foote

Working on the conservation genomics of species that hang out on such remote islands has its challenges but also offers up some incredible opportunities. In January 2022 I travelled as a passenger with Heritage Expeditions to all five of Aotearoa’s subantarctic island groups.

My visit was made possible thanks to the True Young Explorers scholarship offered by Heritage, which offers young people the opportunity to visit and experience these breath-taking islands and become advocates to protect their flora and fauna. This trip really hammered home to me how special these birds are and made me all the more determined to do my part to help bring them back from the brink of extinction.

We acknowledge the special relationship Ngāi Tahu have as kaitiaki of the Toroa/Antipodean Albatross and the support for this project from Te Rūnanga o Ngāi Tahu. Thanks also to the Department of Conservation and the Conservation Services Programme for funding this project.