Genomic sequencing of three invasive wasps paves the way to better options to control these pests. 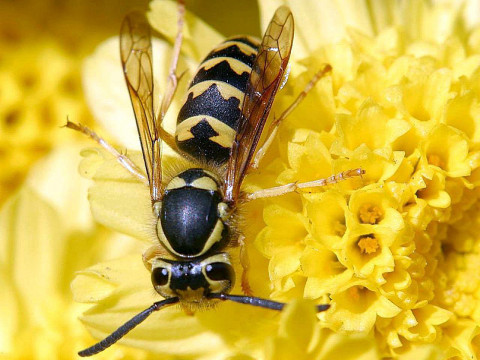 Wasps are significant pests in Aotearoa and other parts of the world, affecting human health, economies, and biodiversity. In Aotearoa they are one of our biggest predator problems – we have some of the highest densities of German and common wasps in the world thanks to an abundance of food, no natural enemies, and a favourable climate.

Wasps are a massive threat to our biodiversity, consuming honeydew in our beech forests, eating native insects, and competing for food with our birds. They are also affecting our honey industry.

In a world first, Genomics Aotearoa researchers, together with a group from the United States have produced the genomes of three wasps - the common wasp (Vespula vulgaris), German wasp (Vespula germanica), and western yellowjacket (Vespula pensylvanica).

Sequencing and interpreting the genomes is a major milestone in understanding the biology of Vespula wasps. The researchers used short-read sequencing and Hi-C scaffolding with tissues from male wasps, which allowed them to produce high quality assemblies quickly and cheaply. Male wasps are haploid – they have a single copy of the genome, which makes analysing their genome more straightforward.

Researchers will now be able to use this genomic information to research and develop next-generation control strategies as well as informing future chemical and genetic control of the pests. It will also be essential for monitoring control methods.

The researchers have already identified genes related to specific traits that may be suitable for targeted pest control. The information could lead to novel control methods, such as RNA interference (RNA-i) and gene drives. The data are already being used to research a potential gene drive targeting spermatogenesis to control the common wasp as part of the country’s Biological Heritage National Science Challenge.

The chance to use leading edge technology for much more targeted and effective wasp control than has ever been possible, paves the way for new control methods in New Zealand's fight against invasive predators. This potentially could make all the difference to a major environmental issue.