Aquatic ecosystem function and diversity along a freshwater-to-marine gradient

The Environmental Metagenomics team based at the University of Auckland has generated a detailed reconstruction of ecosystem composition and function from river-to-sea, following the Waiwera River near Auckland to its estuary and finally beach environment. 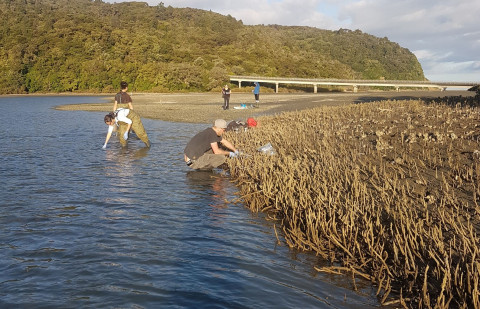 Our estuaries are a key interface between the terrestrial and marine environments, funnelling freshwater and nutrients drained from catchments offshore. To determine the function and diversity of the freshwater-to-marine aquatic ecosystem the project team generated detailed genome- and transcriptome-based reconstructions of microbial communities. The project discovered a strong spatial and taxonomic division of metabolic processes resulting in variation in community contributions to aquatic biogeochemistry for ecosystem productivity, nutrient uptake, and nitrogen removal.

An extraordinary level of detail has been discovered about the composition of aquatic life across the freshwater-to-sea gradient. Although aspects of this have been done in other studies here and overseas, it's the first-time detailed descriptions have been done on this scale.

"We've filled in a lot of gaps, gaining a good understanding of the roles performed by different groups of microorganisms, including methods for obtaining the nutrients they require in water and sediment. Our explanations include the assimilation and transformation of the essential nutrients (and sometimes problematic environmental contaminants) nitrogen and phosphorus; photosynthesis, which supplies the ecosystem with organic carbon; and strategies for tolerating salt stress," lead researcher Kim Handley said.

Because the tidal lagoon estuarine system studied is fairly typical and not severely contaminated, this provides a benchmark, and findings can readily be applied to other New Zealand waterways. It also offers insights for similar river-estuary gradients across the globe.

Variation in biochemical processes across the gradient

This study is one of the first to directly compare metabolic processes in waterborne free-living microorganisms and the underlying soft sediments in an aquatic system, and the first across a freshwater-to-marine gradient. This has shed a light on the different biochemical processes at work.

Freshwater microbial communities and metabolic processes are highly distinct from those in the saline (brackish and marine) environment, as are microbial communities in water versus sediment. This is due to significant differences in salt, nutrient, and oxygen availability requiring distinct strategies for osmo-regulation (control of water balance in cells), nutrient acquisition, and metabolisms reliant on oxygen or oxygen-free environments.

Genome predictions of differences in microbial communities along the gradient indicate that bacteria differentially evolved amino acids that enable tolerance of small increases in salinity, primarily increases in acidic amino acids (the building blocks of proteins). This is a feature not previously known for organisms inhabiting common, but relatively low salinity environments (e.g., brackish, and marine). Increases in acidic amino acid content increase protein stability in the presence of salt. Thus, the incremental changes to genomes and predicted proteomes across the salinity gradient help to explain the highly distributed nature of organisms between freshwater and marine habitats.